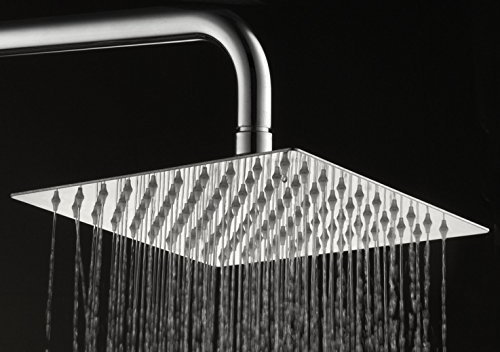 There are only so many simple things that bring joy to us every day. A yummy meal is one. A hot shower is another. We’re going to look at Top 5 best rain shower head reviews simply because standing under a shower and feeling the rain is magnificent.

Unfortunately, we can’t sing and dance in the rain every day, but with a very good rain shower head, we can come close to that.

What is a rainfall shower head?

Basically, a shower head that doesn’t need to be handheld and that feeling like rain falling on your body.

We created a quick comparison table for you to see some features of rainfall showerheads head-to-head (pun fully intended).

As you can see, there are some major differences in shower head size and thickness of the nozzle. In Top5er tradition, we’ll go through all 5 best rain shower head reviews starting with the best-rated one (according to Amazon reviews):

It’s easy to see why LORDEAR F01082CH shower head is praised by all. It has everything a 1st-time buyer of rainfall shower head needs.

Polished chrome with 12” size is standard and, honestly, more than a majority of us need for an exuberating rainfall shower experience. You can go for 16” Koko Brand if you would like to feel like in a rain forest experiencing downpour.

Easy installation and maintenance are great as well. Of course, every rainfall shower head cleans you well enough, but how do you clean the shower head itself in return? Easily:

Well, even the worst rain shower head review is kind of good. I mean, 3-stars is not bad at all, and I’ve yet to see a shower head which wouldn’t have at least one review about ‘everything was crap, I ain’t buying this again, the only true rainfall shower is in under a rainfall’.

In short, if you need a rain experience every day for years on end, LORHEAD shower head does feel like rain falling on your body.

Let’s talk about the shower head technology with the Sun Rise shower head. To fully recreate the natural feeling of rain in your bathroom, we need some good tech. Rain is a natural occurrence but recreating it is not easy at all.

Sun Rise went above and beyond with the technology with their ultra-thin rain shower head (state-of-the-art tech actually enables it to be ultra thin in the first place).

We didn’t go into details about their air energy technology but you can look at what is the entire point of it:

It’s quite unlike any showerhead you’ve ever used. And the best thing? Once it’s installed, you operate it as easily as a normal wall-mounted shower.

This review is not surprising at all. ‘Outperforms all other rain shower heads’ has a nice ring to it. This review was nothing extraordinary – of course, people love advanced air tech rainfall showerheads.

I mean, this is some dedication. But if you want to have a truly wonderful shower on a daily basis, the Sun Rise, when perfect, does provide you with it.

Oh, and the costs. All high tech products have a higher price tag and the best Sun Rise rain shower head is no different. The original price is a whopping $239.99. That makes it both luxurious and, well, overpriced.

If you want to get it much cheaper (every 75% off), make sure you buy it over Amazon because they have some serious discounts on it. That’s how you can buy a luxurious rain shower head for a fraction of the cost. Here you can check the current price of Sun Rise shower head:

The word ‘Giant’ is really interesting here. Back in the day when HotelSpa rain shower head established itself as the new standard, it’s 10” x 14” dimensions were deemed ‘giant’.

With today standards, the dimensions of HotelSpa Giant rain shower head are quite of standard size. Nonetheless, this head remains as one of the best rain shower heads to this day. Admittedly, it is now a bit behind the newer silicone nozzles and advanced air technology that other modern rainfall showers have.

Back in this shower head prime days, the adjustable extension arm was the cutting-edge feature. HotelSpa rainfall head excelled exactly because of incredible ease their extension arm could be adjusted to fit pretty much everybody wanting a rainfall experience under the shower.

If you’re looking best solid rain shower head and don’t want to spend too much, the HotelSpa rainfall head is the well-tested choice.

This is a little 8” rain shower head that is installed in minutes and you need little to worry about it later as well.

The best part of being out of plastic is that it can be cheap. And it is! AKDY’s head is one of the cheapest rain shower heads around. Fortunately, cheap doesn’t mean ugly here, just look at it:

It is also the thickest of the Top 5 best rain shower heads. This has everything to do with being made out of plastic – steel is tougher than plastics, obviously, so you need more plastic to get the same strength.

The experience of showering with a small rain shower head is quite amazing according to Markies:

I would think that it is ideal for people buying rain shower head on a budget. A nice example are college students. I know that I would want a nice relaxing shower if it would cost as little like this one.

With Koko Brand shower head we come to the ‘the bigger it is, the better‘ statement. Why? Well, for one, you won’t find a lot of bigger rain shower heads than the one Koko Brand offers. It’s full 16 inches by 16 inches. To most of the people that is a bit excessive, even for a luxury shower.

However, if you have a big bathroom and want to test out how it feels like standing under a rainfall in your bathroom, you can go right ahead.

One piece of advice: Be sure not to care about the water bill with this one. The Koko Brand rain shower head rains down the water and the water consumption is what you would expect. For example, for the best 8” rainfall shower head you will pay 4 times less for water than with this one (if we assume the flow through the nozzles is the same).

As you can see, the giant rain shower head is not wall-mounted. Instead, it is installed directly on the ceiling. This also means that rainfall shower head installation is not as easy as with the others.

The water pressure also has to be higher than with a standard head simply because Koko Brand requires that much more water.

All in all, this is a big expensive shower head. But it does throw the most water at you and it really feels like a downpour. It feels amazing if you can afford it.

How To Pick The Best Rain Shower Head?

Here is a quick list of best rain shower head features we considered when choosing the rain-effect shower heads:

Do You Need A Rain Shower Head (Alternatives)

In the end, we at Top5er always want you to ask one question – ‘Do I really need a rain shower head?’.

That is to say, we want everybody to make an informed and smart decision when buying anything, be it a shower head or an office chair or even a little thing such as a travel kettle.

That’s why we come up with few alternatives to buying a rain shower head:

Your Suggestions For The Best Rain Shower Head

If you have some experience with any of these showers heads or even a different one, do us all a favor and describe it in the comments. We like to read about both positive and negative views to know what to watch for and what excited you about your pick.