Here is the deal about the dual shower head: you’re probably already using one even though you only have a single shower head.

This is how most of us use a showerhead:

How to use 2-in-1 shower heads? The whole purpose of a double shower head is that you can do both at the same time.

Here is a quick review of a paired shower head by B. Gold (Click To Enlarge):

The basic setup of a dual shower head in 2018 is that you have:

We’ll go through all 5 the best twin shower head reviews and all of them have a stationery + handheld showerhead combo (the #4 pick has a wall-mounted nozzle). The 2-in-1 shower head with a handheld head is pretty much the industry’s standard. You don’t really have a double shower head where both of them would be handheld or both would be wall-mounted.

If, of course, you need just a single shower head, go ahead to the best rainfall shower head reviews.

When it comes to the dual shower heads, the most popular and well-known one is the HydroLuxe full-chrome head.

Why is Hydroluxe an instant best seller? It’s the only shower head to have more than 6000 reviews on Amazon.


It’s the standard and no-nonsense double showerhead. If you’re looking for a basic model, the Hydroluxe is the epiphany of basic.

It comes with two separate shower heads – one is stationary and the other is handheld. How do the dual shower nozzles work? Easy, you can install them like a regular showerhead – just attach them to the pipe and that’s it.

Both shower heads are 4 inches; this is pretty much the standard size. Where the Hydroluxe double shower excels? Two words – shower settings. 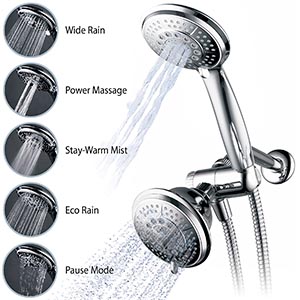 Each showerhead has 5 different shower settings. The names here are pretty self-explanatory:

The design of both showerheads is the same – that’s why you get the same 5 settings with the stationary head as with the handheld one. It also makes fixing a double shower head a bit easier.

The Hydroluxe handheld showerhead also comes with a 5 feet stainless steel hose. This is more than enough to maneuver even if you have a large shower. On the other hand, however, the stationary head has a limited maneuverability.

AquaStorm double head is very comparable to the #1 Hydroluxe. In fact, they both have two 4 inch shower heads; one is stationary while the other is handheld with 5 ft shower hose.

What they also have in common is the price. While it’s very difficult to find a double shower head under $20, the interval between $20 and $30 is actually the sweet spot for the most popular 2-in-1 shower heads.

The AquaStorm paired shower head is under $30 as is the Hydroluxe one but with Hydroluxe you get 5 different settings. With AquaStorm you get an extra setting for the same price:

The Rain/Mist and Rain/Massage shower settings can only be achieved with 2 shower heads. 1st one is ‘Rain’ and the 2nd one is ‘Mist’. Not only does this give you unparallel showering experience, it also provides a way better water coverage than an ordinary shower head.

While other shower heads come in chrome (industry standard), the AquaStorm comes with a silver finish. That’s great for a budget shower head under $30.

With twice the water hitting your body, you can at least theoretically take a shower in half the time. Nonetheless, people do prefer to be in the shower for longer if they enjoy the shower and even if you’re buying on a budget, you can afford the AquaStorm shower head.

How to install the double shower head? It’s as easy as with #1 pick. You won’t need any tools at all and it can be done in minutes. First, you screw on the whole stationary shower head with a holder for the second shower head. Second, you attach the 5ft stainless steel hose that comes along with the shower heads, and you finish with attaching the handheld AquaStorm head to the hose. That’s it!

There are not many showerheads that have the ‘Official American Standard’ title but AquaDance is one of them. What the standard means? Simply that the showerhead was tested over and over again by US showerhead experts and performed as it should. In short, it is a proof that AquaDance dual shower head a solid and reliable head.

The two shower heads are both made out of stainless steel. This does bump it in the next price range but you know what you pay for – stainless steel with a chrome finish gives makes the AquaDance our premium showerhead choice.

Now, about the sizes of both shower heads:

With the #1 and #2 best dual shower head review, we had 4” showerheads. The AquaDance is the first head on the list that has a big stationary shower nozzle – full 7 inches.

You’ll get a lot of shower settings to choose from: namely, 6 different settings both on the big stationary shower head and 6 on the smaller handheld showerhead.

The price of the AquaDance 2-in-1 shower head is a bit higher than a standard dual head but you shouldn’t pay more than $50 for it.

DreamSpa head are one of the kind. In our best double-headed shower head review you’ve seen that most heads are 4” and you have a stationary-handheld combination.

What separates DreamSpa is the wall-mounted showerhead. You’ve read that right – it is not a stationary head that you mount on your shower installation. The big 9” DreamSpa shower head is mounted on the wall, like this:

Of course, mounting a shower head on the wall will require some tools and it’s not as easy as with other shower heads. But is it worth it?

If you enjoy a rainfall shower head, the DreamSpa is well worth it. It also provides you with a completely different experience; most dual showerhead systems have a stationary shower nozzle that sprinkles the water upward. In the case of DreamSpa, the water just falls down because of the wall-mounted showerhead design.

You’ve probably noticed the ‘PUSH BUTTON CONTROL FLOW’ on the DreamSpa photo. This is also something that is unique to the DreamSpa dual handheld showerhead – you can easily just press the button and turn the head on or off. HotelSpa, our #5 pick, has this functionality as well.

Overall, the DreamSpa is the most complex and luxurious dual shower head.

This might be the #5 pick but for someone who likes simplicity, this is the best dual shower head to buy. Why?

Because the HotelSpa duo heads are just so simple. To install and to use, it’s a tool-free installation and you really get what you see with it. Check it out:

You get the big 6” stationary head and the ON/OFF 4” handheld head to complete the showerhead duo.

The ON/OFF switch is especially useful if you want to conserve water or if you just need a single shower head. You don’t always have to use both shower heads if you have a 2-in-1 shower head.

Some people think that ‘dual’ means a ‘2 person shower head’. Not really.

This kind of shower head was designed for a single person use. And what’s so great about it?

The best-paired showerhead with a handheld head obviously delivers 2x the water. Usually, one shower head is for your face and the other is a handheld for everything else.

Two shower heads deliver twice the water amount, regardless of low pressure. Important to note here is that the dual shower head doesn’t increase water pressure but it does double the water flow.

The bad thing about the shower head duo is that you use 2 times as much water.

How To Pick The Best 2 In 1 Shower Heads?

We picked the best 5 double shower heads in the list below. Here are some important features we based our picks on:

Back To You – Which Dual Head Do You Recommend?

If you own or had an experience with a certain model of a double-headed shower head, please do share your experience in the comments.

Try to mention the best and worst aspects of the dual shower head you used.